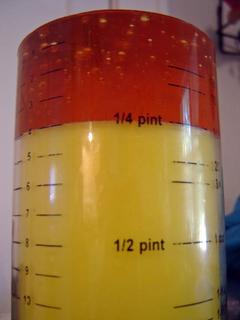 This is the time of year when Jews eat apples and honey. We eat honey on Rosh Hashanah, according to custom, so that the new year will be sweet. The rabbis at the Community Hebrew Academy of Toronto where I did my book learning and more than a little bit of my goofing off in the 1980s never got around to explaining why apples rather than, say, pears, walnuts, or yogurt and honey, all of which are delicious. My best guess is that apples are just in season, which is a pretty boring explanation. Whatever the reason, the combination of a crisp, juicy apple and a dollop of honey is hard to beat.

My apples and honey ice cream captures the flavors perfectly well, but of course it can't match the textures. I don't mean to detract from it. It's a dreamy, creamy delight. But if I were jonesing for apples and honey, I would sooner go for the fresh combination.

To make this one I hybridized a pair recipes from Liddell and Weir's Frozen Desserts: honey ice cream, and Bramley apple ice cream.

Frozen Desserts is a British book, which explains why it contains a recipe using an ingredient, Bramley apples, that you won't find in Milwaukee or anywhere else I might shop for produce. Bramley are tart cooking apples and so I substituted some of the slightly underripe McIntosh we picked a couple of weeks ago at Apple Holler, which are more sour than sweet and which, as I already knew from turning some of them into applesauce for the little applesauce eater, turn swiftly into pulp if you cook them a little bit. In short: I peeled and cored 1.5 lbs of apples, mixed them with lemon juice and zest, cooked them, and added sugar to taste, about 3 tbs. (If I were to do this again and didn't happen to have dozens of apples on hand I would just use applesauce.)

The honey ice cream is made in the usual custard method, but with all heavy cream instead of a mix of cream and milk or cream and half-and-half (itself a mix of cream and milk). This makes it ultra-rich, and I was skeptical about it turning out scoopable. But I trusted the cookbook's authors and it turned out great. It would be a treat all by itself. The ingredients: 4 egg yolks, two cups of heavy cream, half a tsp vanilla (it called for half a bean but I used extract), and half a cup of honey. I used a local orange blossom honey, which is quite a bit more delicious than the typical supermarket honey. I whipped the yolks, tempered them into warm cream, stirred as they cooked up to 170, and then transferred to a bowl. Then I stirred in the vanilla and honey and chilled.

After churning the ice cream I dumped it into a container and took my apple mixture out of the fridge. 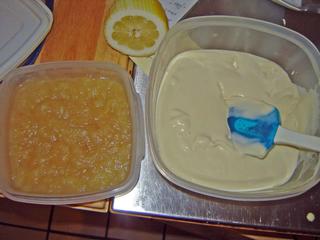 I marbled the apples into the ice cream with a spatula and left it in the freezer to harden. It scooped beautifully, had a thick, rich texture, and a nice contrast between the intense, sweet honey and the icy, fruity apple. It captures the season. 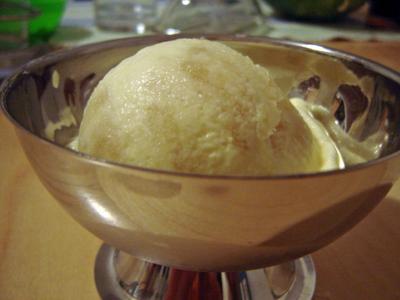